Snow continues apace--I think we have a good two inches on the ground this morning. I am blissed out, and the dogs are convinced the snow came just for them. 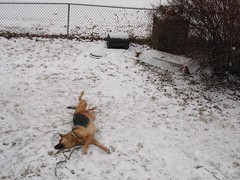 Tonight is drinking craft night at the house by the cemetery--the cemetery has a sign that says YE OLDE TOWNE CEMETERY PASS AT YOUR OWN RISK. A clearer warning of zombie activity I've never seen. We're making wreaths tonight, and by god, I'm putting up Christmas decorations tomorrow, even if it keeps snowing!

helpvera  community has been an amazing success, and has raised enough money to save Vera's house--excess funds are going to fixing the erupting sewer line and hiring a lawyer to protect her family in the future. Science fiction saves, friends. My two auctions are as follows:

Under In the Mere unpublished manuscript: $165 (holy cats)
Palimpsest ARC: $100 (and is now in the region of coming with a basket of goodies, if it hits $150 I'll include a piece of custom jewelry)
Piece of Custom Jewelry Made by Me: $20

The jewelry will increase in awesome commensurate with the bids. These haven't gotten new bids in awhile, so I think I'm going to shut them down on Friday.

justbeast  one of my favorite books. It's hard to express how much I love this book--I don't think I realized just how much until I started reading it to him. I first read it when I was 11, the same age as the protagonists of the book, and maybe that had something to do with the imprinting--seven kids, so realistically portrayed, with burgeoning sexuality and painful exclusion, abuse and shame, but managing some kind of crazy belief in magic out of all of it. That was certainly me at age 11. And the end strikes a note I often strive for in my own writing.

Surely, you must have guessed by now that I'm talking about Stephen King's It.

No? Not the first book you think of when I talk about the spine-deep novels that made me the person I am? Yeah, I know. And it's not cool to admit genuine love of the guy. But when I was 10 I found a box of King novels in the garage and peeled through them all in a summer, except The Stand and It, which are, as you many know, fucking hellaciously long. I read those over the winter, and I think I've probably read It a dozen times since.

It, to me, is a postmodern novel, the book among all of King's heyday novels that strives for something enormous and complex, which is the hallmark of Literature with a capital to me. (I suppose The Stand qualifies, too, but that never hit me as hard, possibly because of the cop-out ending, possibly because it is so concerned with Judeo-Christian Adult Things, and It hit a more primal place in me.) It uses a healthy sampling of the postmodern toolbox--fake historical narrative, unreliable narrators, suburban miasma, naked autobiography masked as fiction, obvious authorial standin, multiple crossed timelines, pop culture as folklore, even the title--and dude gets no credit for it because his name is Stephen King. But it is a postmodern masterpiece, the best thing he ever wrote, in my mind, and it scared the crap out of me.

justbeast , I kept wondering how I was ever going to do It's voice. That shit is the voice of my childhood nightmares. And it's hard. But reading it I remember how I've reacted to many, many readings of the book over the years, how the kids in my fifth grade class used to hoard a tattered copy because there was a really explicit sex scene on page 101 and we all read it over and over to each other in hushed, confused tones. (King sex scenes can get a little florid. Keep in mind what I write when I say that. So we really had no idea what the hell he was talking about, but it was clearly Important.) How I got in so much trouble for asking what "cunt" meant at a dinner party that the book was taken away from me for a few months, deemed too adult. (Of course it probably was, but since no one had an issue with me devouring his oeuvre, one word shouldn't have mattered. Fuck, they let me read Gerald's Game, which was the last book of his I read with any interest, and then immediately put down--that was the end of my King obsession.) Since I couldn't read it, it of course became this talismanic thing I snuck out of the top shelf while everyone was sleeping.

And I keep thinking: oh, man,

justbeast , you've got so much awesome coming! The apocalyptic rock fight! Sex in the sewers! Pennywise! Derry! Your hair is winter fire!

But he doesn't love horror like I do, so I hope he lets me get to that stuff.

The funny thing is: where

justbeast  grew up in Russia reading SF, I grew up in Seattle reading horror. Before fantasy, before SF, for me there was horror. I loved it. I ate it up, anything scary that I could find. I made a beeline for the horror section in any bookstore, this pixie-ish little girl with long hair looking for something to make her shiver. I don't know why--I suspect a psychiatrist would say I wanted to read about worse things than the ones that were happening to me, and Stephen King is the master of bad things happening to kids. But horror raised me, in a very real way, and I still love it, and wish things like It were still being written. I wish I could write something that big and black and gorgeous. Of course, who would publish an 1100 page book of nightmares these days?

And now I live in Maine. It's even possible that King is the reason I fixated on Maine as a child and wanted to live here. So cracking open that tome--man, I wish I had a hardback instead of a lame movie tie-in mass market!--feels like coming full circle.

Here's to the Losers Club.

If you could ask me anything about epic fantasy or worldbuilding, or hear my clever and essay-length thoughts on the same, what would it be/what would you like to hear?

Yes, that is a Julian of Norwich reference, because I enjoy the idea of cyber-anchorites. Yea verily, a/s/l?

matociquala , I've decided to motivate myself to finish the Monogatari (working title, I kill all titles) novel by liveblogging my daily work there. You can all scold me if I do not appear to be working on it. It's like a director's commentary, or a video game walkthrough.

I'll also twitter there in general, probably too much, being a me-type person. I will spare you all the LoudTwitter thing. I got a thousand of these guys in my office right now. The temporary map tats, not arms. That would be creepy.